FREE Listen/Download
of an old cassette released
through Friends & Relatives!!!
featuring cover artwork by Chelsea Dee Rhody
(the 4th release on the label?!?  2002!?!?)
The MEAN-AGERS  -  "s/t" 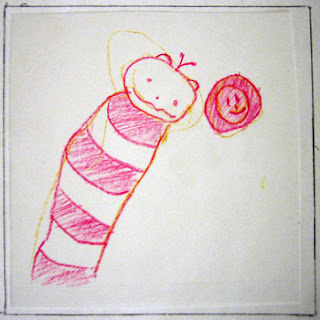 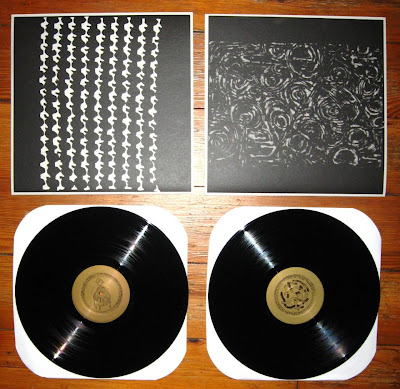 (Two sub-underground acts from the Midwest U.S. split sides on this LP, creating a coin-flip encrusted venture into the thrills of deep listening & free improvisation with leanings towards futurism and organically based lowercase compositions...  (D)(B)(H) is a free wheeling ensemble with a rotating cast and fluctuating approach/sound. This time in a quartet formation, we're offered a 21 minute piece entitled "Bad For Business" that equally embraces minimalist percussion, mangled tape manipulation, fluent fire-breathing saxophone, reductive guitars and spittle trumpet. Recorded live in the studio of a radio station, this presents the group within their most hi-fi documentation to date with a special presence put upon the dynamics of volume and space...  Seeded Plain is the duo of Bryan Day and Jay Kreimer, both of whom design, build and perform upon otherworldly instruments constructed using practical composite designs, combining everyday objects with finished wood and metal forms ("alchemists of hardware stores, surplus catalogs, and discarded objects.") Teaming up with the underground legend Hal Rammel and his "amplified palette", the trio presents 4 tracks of energy filled sound reminiscent of "wind chime cheese slicers, bed springs and lengths of rope." Adventurous listening...  Cover paintings by Peter Shear and Brad Krieger screen printed onto recycled LP jackets with a slight splattering of gold paint worked into the subtlety. Double sided full sized insert and hand stamped (golden) center labels created with custom cut 3" circular rubber stamps.
Pressed in a limited edition of 300 copies.) 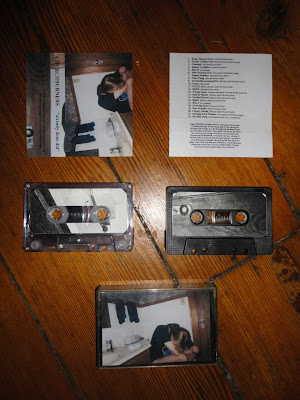 (Churchburners has been the long running moniker of Rockford, Illinois' prolific home-taper Zach Ippen.  This cassette is his "greatest hits" of sorts, a collection of tracks spanning the first decade of the 21st century, selected by Justin Rhody.  Humorous a cappella and spoken word tracks, cut alongside over-driven 4 track explosions of degraded rhythmic noise - interspersed between mouth-sound layerings and beautiful cinematic oddball meanderings.  Variety and adventure are the name of the game here, and "we're a winner"!  For fans of lo-fi home recordings as known by early-Sebadoh/Sentridoh, Avocado Baby, Half Japanese/Jad Fair, etc...  Tired of that huge pile of tapes and cd-r's clogging up the bachelor pad?  Well no need to fret, cause now all your favorite Churchburner tracks are available on one compact cassette!!!)

recent review for the
(D)(B)(H) / Seeded Plain & Hal Rammel - split LP
"Two Midwestern outfits get active. (D)(B)(H) side = Euro free improvisation, the type with a saxophone spastically/gingerly blurting while three guys clatter metal and percussive objects in restless fashion. Takes a whole side to resolve... Seeded Plain team up with Hal Rammel on their side for some even more abstract, noisome improvisation on homemade instruments and amplified palette... unpredictable, as the listener can neither see nor determine the makeup of the tools at play here – part windchime, part cheese slicer? Who had six thumbs and fingers that are all cut up and mutilated? THESE GUYS. Adventurous listening, particularly the latter, in a homemade looking sleeve. One has to wonder if the economic nightmare of Europe circa now is putting a damper on guys like these, and their ability to make a living through their art; after all, this is where such music seemed to thrive for decades on end. Then again, is that even a concern for such groups? The ivy-covered walls of academia and the rebellion that brews within each individual trapped inside informs the scrappy, unsettling sounds found here." --Doug Mosurock, Still Single
No comments: 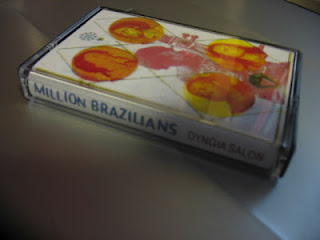 "This was a little unexpected but a totally amazing find. Man, Friends and Relatives Records has definitely carved out their own interesting niche in experimental music. This is the second release and the third artist of theirs that works in the experimental jazz genre. Two long instrumental jams are encoded on this cassette that both somehow move between free jazz, middle eastern classical, drone, and tribal music. The first side of this tape sounds like a Curtis Mayfield jam meets a Raga. It's super good. Maybe something Herbie Hancock might have explored had he not gone into the electro jazz direction that I was never able to get into. The second side is more of a drone track with a middle eastern/indian feel before swirling into a tribal trance. I love the canned/lo-fi sound on this cassette. It's like listening to this band practice through your bedroom wall. Excellent release. Limited to 50 copies. Good luck on this one."  --Dead Formats
recent review for the new
LOUGOW  "king conversion"  Cassette 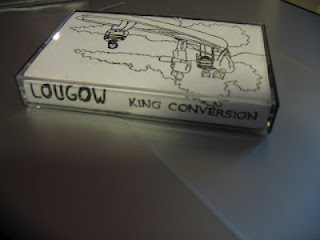 "I am finding this tape a little hard to pin down. It's eclectic and interesting. It leans towards the drone side of things but it's not. It has moments of electro acoustical sounding instrumentation and some bit of noise but it feels more preplanned than noise. It's kinda beautiful in general but also hard to make out the edges. Like a beautiful woman preserved under ice. This has been compared to John Cage and I think I can hear that. I have listened to it five times today both actively and passively and I keep noticing different things about it. It's good. The artwork is both naive and understated but it's also very nicely drawn. All around it's a worthwhile cassette to own. Limited to 50 copies."  --Dead Formats
No comments: